The East Grinstead and District Guild of Church Bell Ringers

It is with great sadness that we report the death on Saturday 27 April 2019 of John Warner, a member of the Guild for many years.

John rang 14 peals for the Guild, the first in 1960 and the last in 2004, and he was at one time a member of the Guild's committee, and also a Vice Chairman of the Guild.

The following is based on the eulogy given at David’s funeral by his elder son, Nick:

David was born in Waterloo, near Liverpool, on 18 April 1943, the youngest son of Ernest and Kathryn. He spent his early years in Liverpool, becoming a lifelong Everton supporter. He won a scholarship to Merchant Taylors School, which was curtailed when his family moved to Nantwich.

While at school in Nantwich David learned to play brass instruments and to ring church bells.  Much of his early ringing was done at Wrenbury (an 11-cwt ring of six, about five miles from Nantwich). David was clearly an adventurous school pupil, losing has prefect’s badge after being discovered larking about on the school roof. He was also a useful sprinter, which must have come in handy!

After his A Levels, David went on to Kesteven Teacher Training College where he met Lesley. They both qualified as teachers, were married in 1965, and went to work in Norwich.  Whilst in Norwich their daughter Sarah and son Nicholas were born. Their younger son, Chris, was born soon after they moved to Horam in Sussex.

David taught at St Mary’s school in Maynard’s Green, and later became deputy head at Spring Gardens School in Tunbridge Wells.  When the school closed he was made redundant and retired. In retirement he took a number of jobs, including returning to St Mary’s school to teach brass, decorating the local Indian restaurant and driving a hearse.

David was energetic, full of curiosity, generous, patient, courageous, and ever enthusiastic for his latest project. He was always planning a new adventure and encouraging others to embark on their own. He was a man of many hats: musician, bandsman and conductor, beekeeper, rambler, chairman of the East Grinstead and District Guild of Church Bell Ringers, quiz writer, political activist (who stood for parliament), darts player, Everton season ticket holder, Vines Cross Wheeler, investment club founder, cricketer, umpire, painter and decorator, car enthusiast and builder, path layer, baker of pork pies, boatman, and much more.

But whatever David was doing, Lesley was never far away. Joining in, sometimes with a look of resigned amusement, occasionally moderating the more extreme plans, and always keeping the show on the road.

David was diagnosed with angina in the 1950’s and eventually had a stent fitted. Thus restored to full health he stopped worrying and started travelling: around the world, watching the Ashes in Australia, and to Barbados to visit friends. About ten years ago a heart bypass and a new valve re-vitalised him for more adventures, including climbing Ben Nevis.

At the beginning of January 2018, while in Liverpool staying with Nick and his family, he became short of breath and underwent tests in A&E. He was deemed fit to go home, and to go on a cruise to the Arctic to see the Northern Lights. His health deteriorated towards the end of the trip and on his return to the UK he was diagnosed with heart failure. The family prepared for a slow decline, which was not to be. On 31 January David suffered from a heart attack from which he did not recover.

President and past secretary of the Guild passed away peacefully on 4 February after a spell in hospital.

Born Margaret Ann Ladd in Tunbridge Wells, the only daughter of Ernie and Marjorie Ladd, she was educated in Tunbridge Wells and Tonbridge. On leaving school she became Secretary to the Principal of Tunbridge Wells Art School, where in her spare time she acquired her lifelong skills and love of dressmaking and tailoring, which she carried out to professional standards. This gift of hers was to receive many well-earned acclamations over the years with the making of many dresses and suits for clients, including bridal gowns for friends, choristers robes for St Swithun's Church and even habits for the Sisters of St Margaret's Convent in East Grinstead. As leader of St Swithun's Wives Group in 1982 Margaret masterminded the making of over 200 kneelers for the Church, each one to a very high standard and a common theme, but different in detail. These kneelers have stood the test of time and are still in everyday use.

In 1967 Margaret married Ray Large in Tonbridge Parish Church. They set up home in Tonbridge where their two children Jonathan and Sarah were born. They moved to a new home in East Grinstead in July 1975, where the family have lived to this day.

Having Ernie Ladd as her father it was inevitable that Margaret would be taken to ringing meetings and practices at an early age, and having been introduced to our art she learnt to ring with her father at Tunbridge Wells. Margaret rang regularly at Tunbridge Wells, then Tonbridge and at East Grinstead from 1975. She was in fact the third generation of bell ringers together with her father and grandfather who all rang at St Swithun's East Grinstead. She learnt change ringing on handbells through attending regular Monday night practices with Walter and Sheila Dobbie and Frank and Elsie Hairs at their house in Groombridge.

But it was the East Grinstrad and District Guild that occupied Margaret throughout her ringing life, which she joined in 1951. Her father had been a member since just after the Guild's inception in 1927 and many of her contemporaries were members. In 1962 she was elected secretary to the Guild, a post which she held continuously for 25 years. My own fond memories of Margaret go back to those times (I joined the Guild in 1966). I very well remember her untiring work to sustain and promote the Guild as a friendly, relaxed group of ringers from all over what is quite a large area and of all abilities, which is what it was set up to be and what it remains today. During my own spell as Guild Chairman Margaret was a source of great strength and encouragement, through good and not so good times. Following her "retirement" from that post Margaret was elected a Vice President and, in 2011, became the Guild's first female President, a post which her father had held in the 1990s and which she held until her death.

Margaret is recorded on Pealbase as having rung 114 peals in many towers in Sussex, Kent and elsewhere, including two on handbells. Her total embraced 25 for Sussex CA (including one on handbells rung at Frank and Elsie Hairs' home in Groombridge in 1962), 56 for Kent CA, five for the Sufolk Guild (during stays with her cousin in Beccles), one for the Cumberlands, one for the Irish Association in Dublin on handbells, and 26 for the East Grinstead Guild. In the beginning these were accomplished using a Vespa scooter as transport, including making it with a friend to Dublin, via Liverpool and Belfast, to ring her first peal of Grandsire Doubles on handbells in 1961.

Margaret's funeral service was held at St Swithun's East Grinstead on 27 February, when over 100 friends and family gathered for the service, followed by a reception in nearby Chequer Mead Arts Centre and cremation at Tunbridge Wells. All 12 bells were rung before and after the service by members of the East Grinstead Guild, Sussex, Surrey and Kent County Associations.

Never lost for words Margaret was a bright and bubbly person who had many friends and acquaintances. She had been a regular at St Swithun's Church and belfry for many years until illness preveted her from attending. She leaves behind a devoted husband Ray, children Sarah and Jonathan, and grandchildren Daisy and Alice. May she rest in peace.

Visit to the Whitechapel Bell Foundry 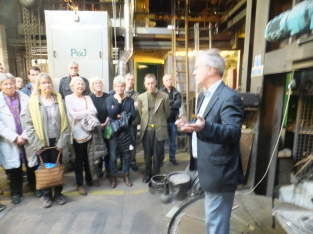 A group of more than 20 members and friends visited the Whitechapel Bell Foundry on Saturday 18 February 2017. Here we see Alan Hughes (Company Director) speaking to the group.

Sadly, the foundry will be closing shortly, but there are hopes that the premises may be kept as a museum.

Prior to the visit members rang at St George in the East (Stepney), a light ring of eight bells.

Thanks go to Gail Terry (Redhill) for taking the photograph. 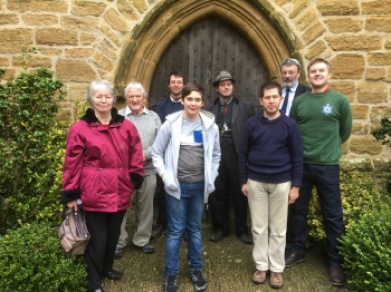 On 7 January 2017 Ollie Watson rang his first peal at his first attempt.  The peal of Plain Bob Major, rung at Withyham, was conducted by Alan Pink, using his own composition.

Following lunch with members of their families, the couple celebrated their Big Birthdays (60 and 70) AND their wedding with ringers from Bletchingley, Coulsdon and Redhill at Bletchingley Golf Club.

The wedding had been kept secret from the guests, who were somewhat surprised when Patrick revealed details before the meal. 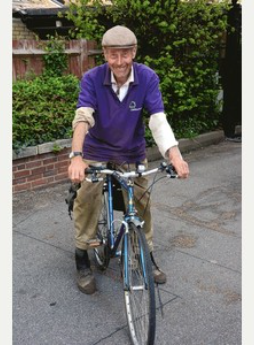 A WELL-KNOWN cycling gardener from Tunbridge Wells – who was brought up by Barnardo's with his twin brother – went to Buckingham Palace to celebrate the charity's 150th anniversary.

Ian Cochrane, 72, who lives in Sherwood but can be seen cycling all over Tunbridge Wells, went to the palace for the reception with his brother David.

Mr Cochrane, who keeps the garden of St Peter's Church on Bayhall Road looking colourful and winds the church clock, said of the royal garden party: "It was very, very good. The weather was excellent. Everyone was in their posh suits, tops and tails, some of them.

"We had tea, all kinds of sandwiches and little cakes." 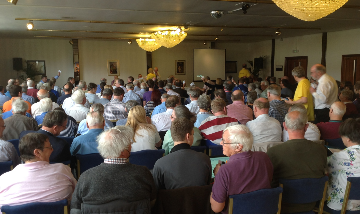 More than 180 delegates attended the meeting at the Best Western Royal Beach Hotel in Southsea on Monday 29 May 2016.  The meeting started at 9.30 am and finished at 5.30 pm 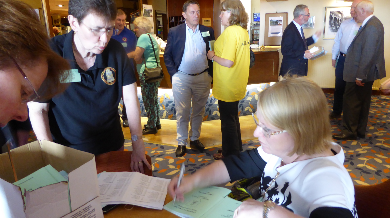 It's not all Council business, though. Here's Caroline Stockmann (EGDG Member and newly elected Central Council Representative for the Kent Association) making good use of the lunch break by carrying out her duties as Secretary of the Guild of St Agatha and speaking with their Representative, Anne Bray, while EGDG Representative (and fellow GOSA member) Kate Desbottes looks on.  It's a small world!

In the background, far right, the Council's President (Chris Mew) can be seen speaking to Christopher O'Mahony, who will become President next year.

On Sunday 8 May 2016 a Quarter Peal of Plain Bob Triples, conducted by Anthony Leeves, was rung at Edenbridge to celebrate Helen Goldstraw's 20 years of ringing.

Congratulations to Helen, and to the other members of the band.